Holly Ransom Appointed to Cox Board of Management

Holly Ransom, entrepreneur and innovation specialist, has been appointed to the Cox Architecture Board of Management.

This is a significant appointment in many ways, most importantly in that it is the first external appointment Cox Architecture has made to the Board of Management, which is chaired by Andrew Demetriou.

“Holly joins us as the youngest member and first woman appointed to the Board, and while Holly’s accomplishments and accolades are a feat unto themselves, it is her wealth of experience and energy that makes Holly a natural choice for Cox,” he says.

Holly is an experienced non-executive director across the private, government and non-profit sectors, both in a statutory and advisory board capacity. In 2014, the Prime Minister of Australia appointed Holly to Chair the G20 Youth Summit, resulting in the first summit to secure its policy demands from G20 leaders.

Holly is the CEO of Emergent, a company specialising in disruptive strategy and building the capacity of leaders to execute change, working with clients such as Microsoft, Virgin, and KPMG. She is also a global keynote speaker and is renowned for her commentary on intergenerational economic and social issues.

In 2016, Holly became the youngest ever woman appointed to the board of an AFL football club with her appointment as a Director of Port Adelaide Football Club and was also asked by the AFL to serve on their advisory Board for the launch of the AFL Women’s League.

Holly’s experience, energy and drive is complimentary to the nature of our practice, aligning seamlessly yet contributing a new perspective to our thinking.

“Cox Architecture is a practice committed to enhancing our cities and pursuing new ways of thinking, and I look forward to working with a group that values innovation and design excellence,” says Holly.

More than simple recognition for her innovative nature and energy, this appointment acknowledges Holly’s proven, diverse skill set and valuable contributions that will no doubt shape the practice moving forward.

Holly joins us at an exciting time for our practice, one of great change and progression. Please join us in congratulating and welcoming Holly to Cox Architecture![/vc_column_text][/vc_column][vc_column width=”1/2″][vc_images_carousel images=”5533″][vc_column_text] 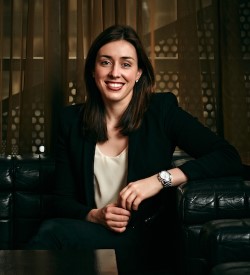