It doesn’t seem to matter that business psychology and endless papers on the subject of ‘team-building’ have proven the practical benefits beyond any reasonable doubt. What matters is that when you try to talk about such exercises you inevitably come off as sounding either trite or as some kind of corporate fan-boy. Too much structure and the programme will appear artificial and over-engineered, too little and it’s reduced to the ubiquitous corporate ‘jolly’.

What’s hardest however is finding a way to articulate when the combination of people and place, history and future, content and stimulus yield an experience which is authentically special.

Hopefully I haven’t already lost you because what I’ll say next may test your suspension of disbelief; the exercise in question is called the ‘Founder’s Retreat’ and is first progeny of the recently formed ‘Futures Committee’ within Cox. Yes, I know this sounds like a strange combination of outback vineyard and dystopian science fiction novel but park the cynicism and look past the phraseology and you can quickly begin to see why this is something of a departure from the usual team-building norms…

It’s the tension of the two ‘F’s that signals the significance – ‘Founder’ speaks to origins and legacy and ‘Futures’ is obvious in its intent. Focus on one without the other and the result is either passive retrospective or ungrounded future-gazing. Combine the two and the tension creates the condition for two things; authenticity and consequence.

The Futures Committee itself reflects a conscious decision by Cox to not only prepare for the future, but to be authors of it within our spheres of influence. The practice has recognised that for this to happen a future focus must become a cultural underpinning and not just an academic exercise consigned to ‘R&D’ or some outsourced studies. As such the Committee is comprised of representatives from each office who best represent the culture of future focus we wish to inculcate; staff with tenure in the organisation but who represent generations of future leaders (rather than the current Directorship). This group has a clear charter and significant resource base with which to realise worthy proposals – regardless of origin or area of focus.

The ‘Founder’s Retreat’ is literally that. It is the place where Philip Cox AO, goes to think and engage with his passions for landscape, art and culture. Philip first found the site while camping in the 70s but is now a more consistent resident with a more permanent ‘camp site’. Philip is now a consultant to the practice but his cultural influence is undiminished. These retreats I would suggest actually enhance this influence and rather than being a ‘guardian of legacy’ Philip is an energised agent provocateur who wants nothing more than for the practice and its people to succeed and adhere to its commitment to excellence. He balances support with a honed-edge born of experience so he’s not afraid to slay a few sacred cows along the way and ask some distinctly pointed questions – as our group soon discovered.

The man and the place together have tremendous impact before a word is spoken. The structures, established over a span of years pay equal respect to both the user and the landscape, a kind of recessive architecture whose beauty is fully appreciated through use. The surrounding wilderness eases gently through the informal to the formal, again in way that seeps into consciousness rather than demanding attention. There is much written by better wordsmiths than I on the architecture and landscape of Bermagui and my point here focuses on the power of this context and its effect on the perspective of the guest. Many businesses can afford beautiful and remote spots for company retreats but few (if any) can connect the soul of the destination through the man that created both the place and the practice. The architecture of Bermagui itself is an expression of one of the practice’s enduring philosophies to ‘do more with less’ –an expression of sustainability, response to pervasive economic conditions and how we define excellence in design. Each building responds to its context with purpose, looking to contribute to the viewer’s experience of a gallery, a library or a landscape. Again, these are powerful and elegant reminders of Cox’s raison d’etre to contribute to public life and civil society – at any scale and in any sector.

The stage was set and the protagonists assembled. What remained was how our time would be orchestrated. I use that word deliberately, partly for its innate elegance but mostly because it avoids words like ‘agenda’ or terms like ‘free time’. There was no formal agenda (other than the breaking of bread of course) but neither was there ‘free time’. Assembling for meals provided the timeless basis for in-depth and often impassioned discussion, gently directed using a series of simple questions and universally appreciated practice themes. All that was asked was for each participant to recall and record their thoughts, and to write down any potential future activity arising from those conversations. 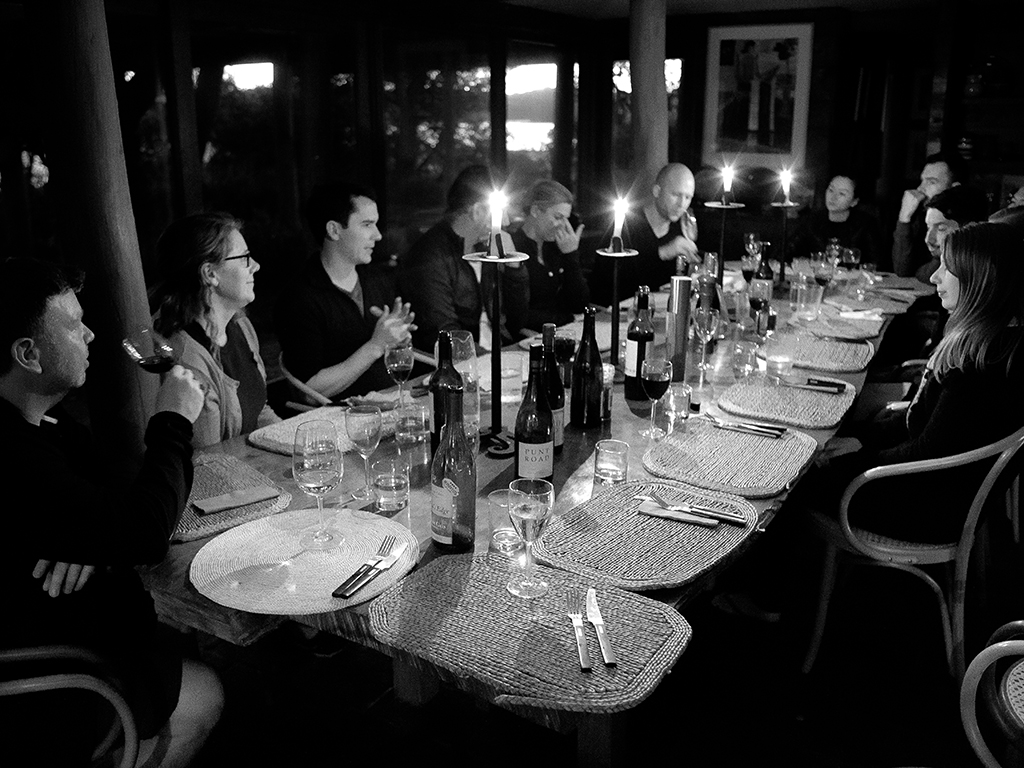 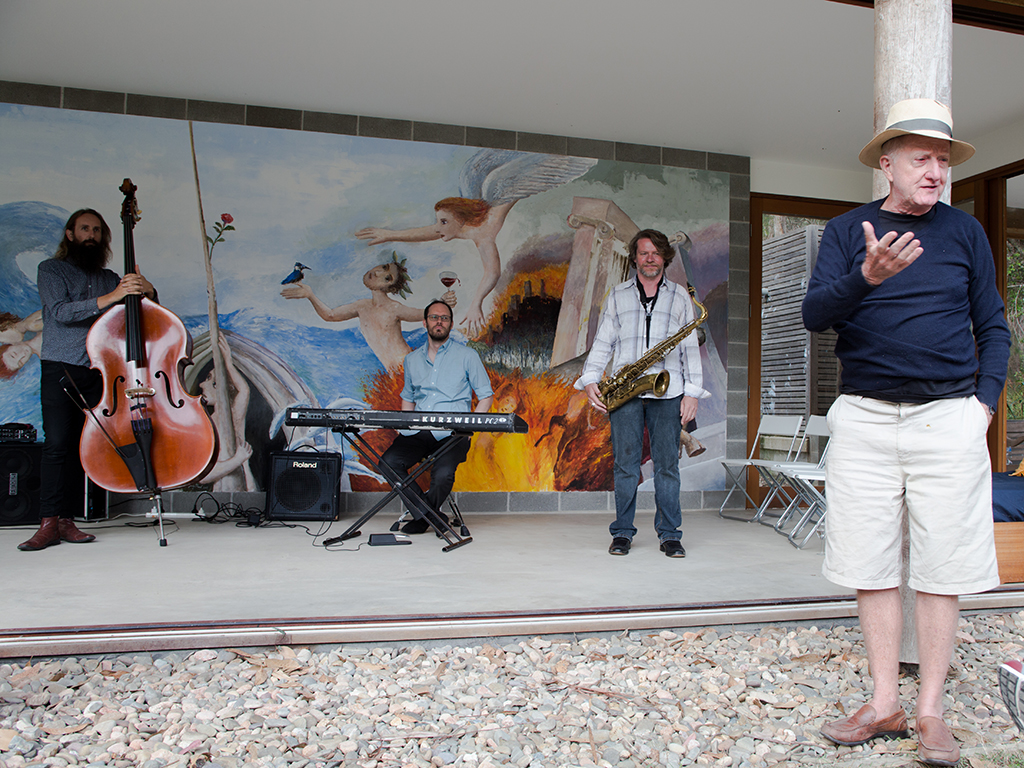 It is important to note that this breaking of bread also provided a very natural dynamic in which to engage and to learn. The group, under the watchful eyes of Philip, guest chef Brigitte and sous chef Ramin all helped prepare the meal and clean table. Right down to the detail of the bio-dynamic wine and the local produce, each assembly of the group was given an attention to detail which could facilitate new awareness – and at the very least underline the importance with which the gathering is seen by the practice.

Each walk along the remote beach or in the adjacent wilderness provided the perfect opportunity for colleagues, hitherto either unknown or only by e-mail, to get to know one another and to discuss everything from family to global politics.

Last (and by no means least) in the orchestration of the 3 days was the role of literature, art and music. Again, apart from the intrinsic value of these pursuits we had another reminder that a central tenet of the practice and its valuing of intercultural connections and the lessons that architecture and the built professions can take from them. Perhaps the most powerful demonstration of these connections was the appearance of a virtuoso jazz trio from Canberra, staged in Philip’s lakeside pavilion, containing a recently completed original fresco by renowned artist Gary Shead. The combination of people, place, stimuli and open minds yielded the most revealing conversation about the parallels between jazz and architecture and the necessity to innovate and improvise. It’s a conversation I can’t conceive of having anywhere (or anywhen) else. And that’s the point. As I said at the outset, as soon as you try to write this stuff down outside of the moment it’s easy to lose confidence and question your emotional response. The worry is not that the words will be construed as some high-brow archi-nonsense, but that they will fail do justice to an authentically special experience which I have no doubt will yield tremendous future value to Cox as a progressive practice.

On balance, I think the phrase ‘you had to be there’ probably describes it best.

End note
Clichéd as it might sound the Practice recognises that it is the sum of its people – more than the extensive portfolio, whizzy new VR suites or even our esteemed cadre of current Directors. For a profession like ours to subordinate ‘work’ to ‘people’ is not easy but make no mistake, it is a recognition that the relationships we nurture that are the lifeblood for any future success. The Founder’s Retreat is but one of many elements the practice is investing in to this end. 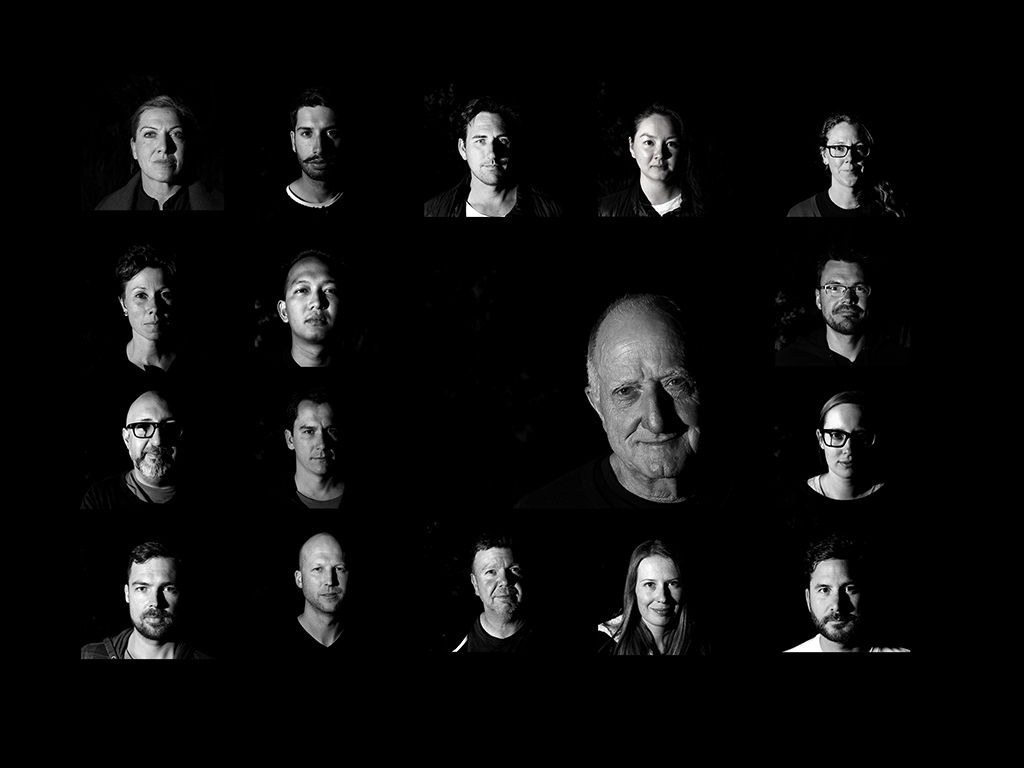