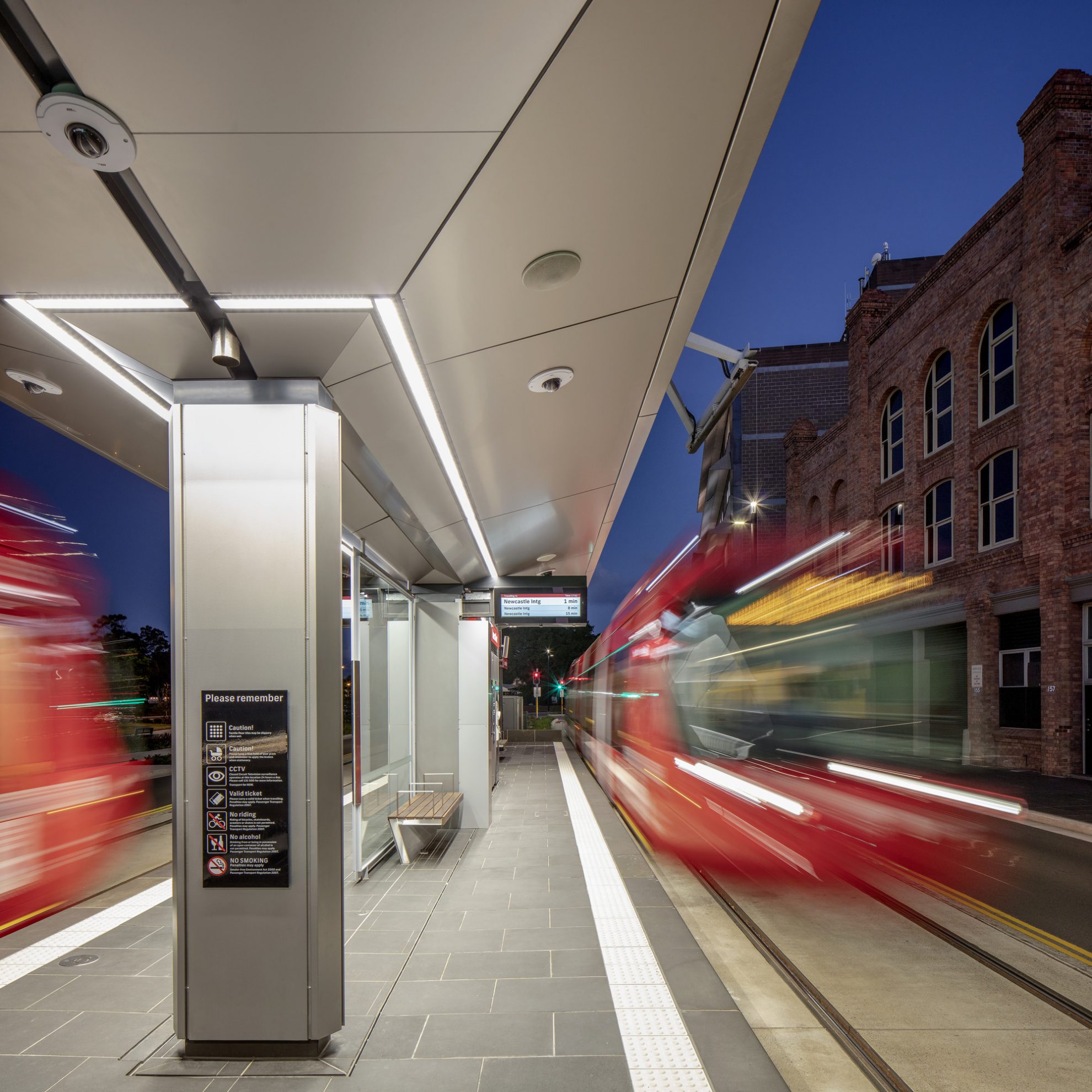 The way we move through them is fundamental to how we experience them.

What makes light rail so important? How do these projects act as catalysts for urban transformation? How do they enrich urban life?

We look at three recent light rail projects where COX has provided planning, architectural and urban design services for the answers.

The precinct and station design team viewed the design response in this broader context. The design is considered as part of an overall network – a seamless extension of Stage 1 works and a continuation of city-building initiatives.

Stage 2 is anchored by a major institutional destination to the south and successful commercial precinct to the north, with a range of light industrial and established residential neighbourhoods in-between. These communities benefit from the new light rail stations and connection to the broader region.

Helensvale has taken on an important role, becoming a recognised place of welcome and the defined gateway to the unique Gold Coast experience. 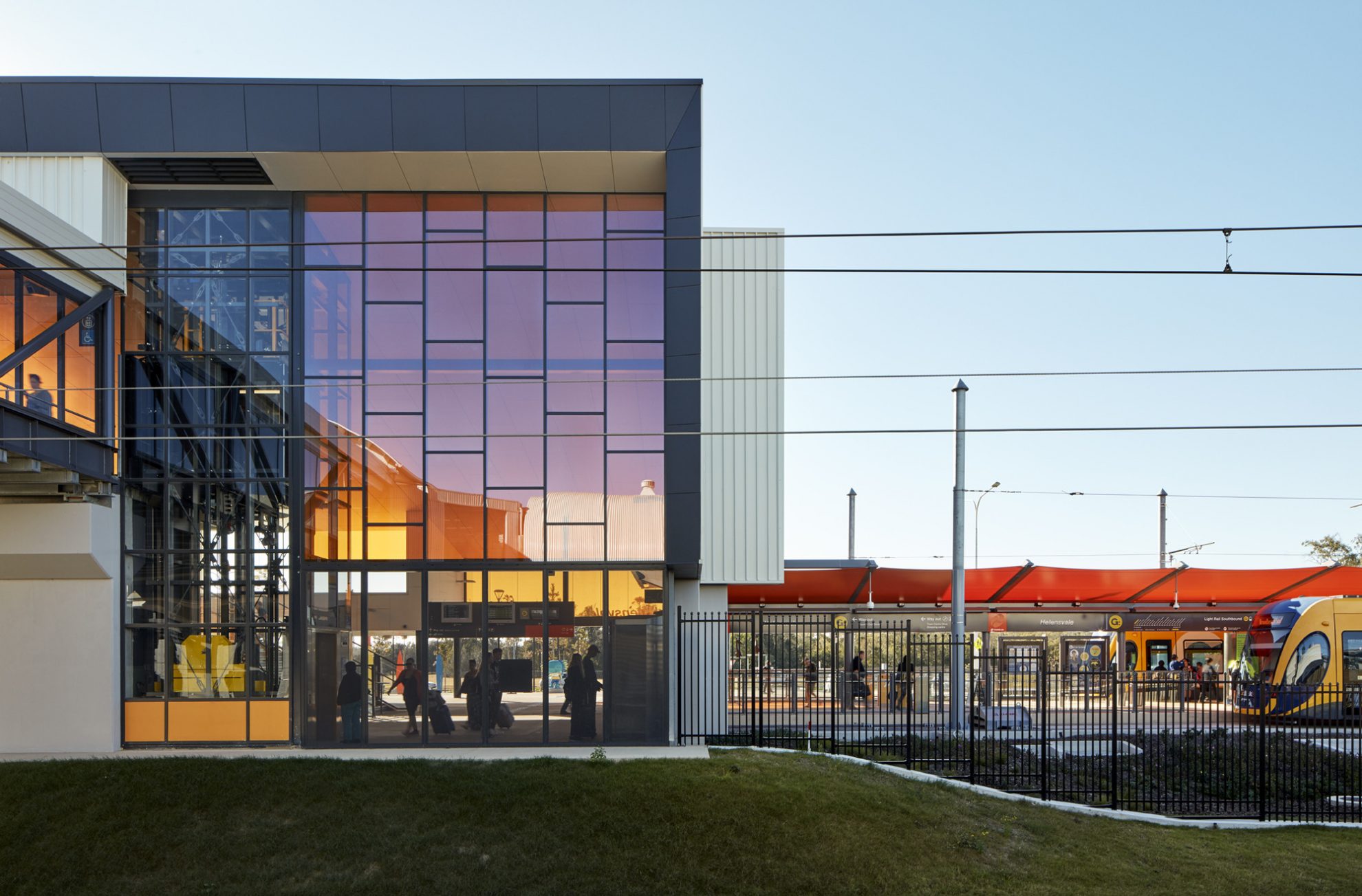 The urban design and station design approach is focussed on providing a stimulating, legible, usable, and comfortable network and associated public realm. The design integrates the existing fabric and protects the amenity of residents, simultaneously delivering the vital transport outcome of connecting a world class light rail system to the heavy rail network.

Newcastle Light Rail is more than just a transportation upgrade, it is part of a wider strategy to reinvigorate Newcastle and reconnect the CBD to its waterfront.

A replacement of the old heavy rail system to suit an evolving city, the project provides 6 stops and a light maintenance depot at Wickham, including a 2km street running section through the historical built environment of Hunter and Scott Streets.

Involved in the Newcastle Light Rail project from initial Land Use assessment, Master Planning and Urban Design, through Reference Design to Documentation, COX played an instrumental role in this transformative project.

The insertion of the new light rail system into the city fabric has been supported by the delivery of a world class public domain and iconic stop designs that have revitalised the urban environment, redefined the city and created a new identity for Newcastle. 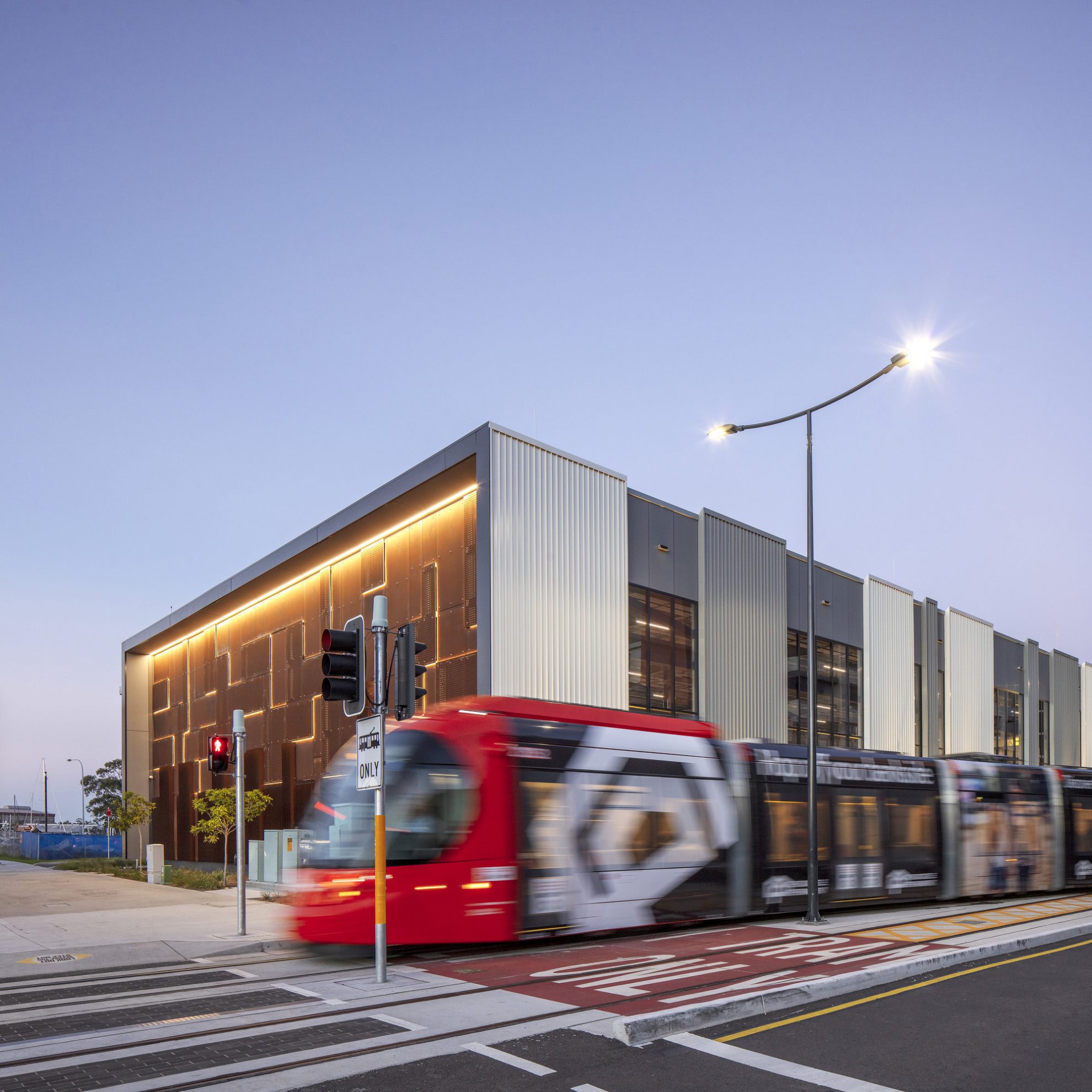 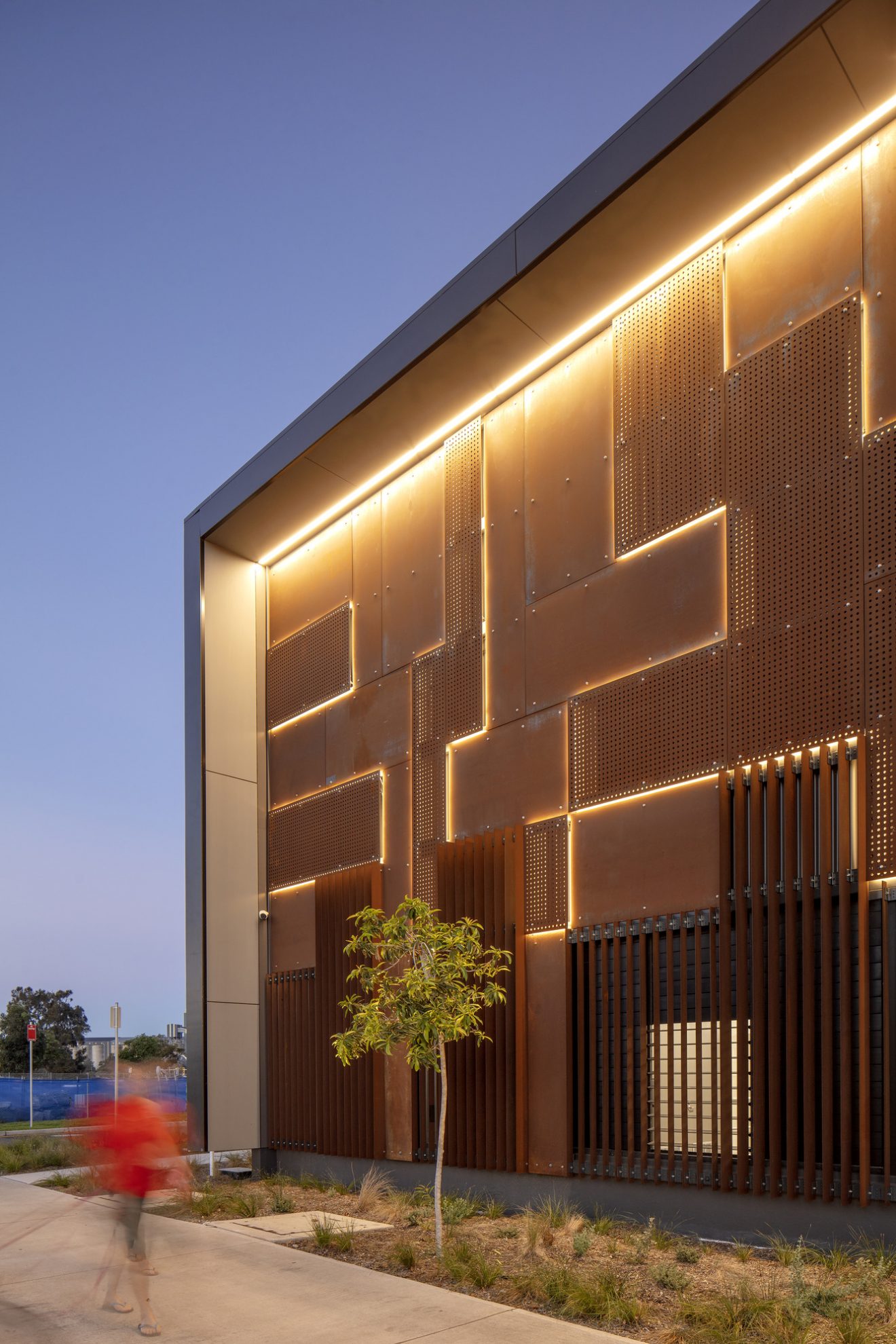 The project contributes to the wider city shaping priorities of the Revitalising Newcastle program through careful design that increases amenity and improves the overall streetscape. The increased comfort for pedestrians brings life to streets, which has flow-on benefits to retail trade, public safety and contributes to a sense of place.

The creation of a unique façade on the Depot building at the new city gateway at Wickham speaks to the history of steel and craft in Newcastle, while Honeysuckle Corridor provides significant urban native greenway along the old heavy-rail corridor within the Newcastle city fabric. Treatments along the alignment reflect Old Honeysuckle Station, Indigenous History, Trams and Trains, Coal Mining, and the Market Street Boat Harbour.

The Depot sits within a dynamic and changing urban environment. As a low scale structure in this environment, the Depot uses simple, lightweight materials that are carefully patterned to deliver a simple building that while not competing with the urban context, adds variety and interest in what is a functional element.

The stop design features iconic charge bars at each stop. The angular structures are minimal in form but are distinct elements in the new urban fabric around each stop. The simple, clean lines of the shelter and on-platform equipment seek to minimise clutter and present a streamlined form to the architecture.

Newcastle Light Rail was a finalist in the Australian Urban Design Awards in 2019.

By 2036, more than half of all Sydneysiders will call Western Sydney home – a population shift that is moving the heart of metropolitan Sydney to the west, and elevating Parramatta’s status as Australia’s next great city. This growth will be seen from Greater Parramatta to the Olympic Peninsula (GPOP) priority growth area, primarily within several precincts including Westmead, Parramatta North, Parramatta CBD, Camellia, Telopea and Rydalmere.

A key element is the Parramatta Light Rail project, a major NSW Government infrastructure project, being delivered to serve a growing Sydney. The project is being delivered by two consortia with different roles:

Parramatta Light Rail will connect Westmead to Carlingford via the Parramatta CBD and Camellia with a two-way track spanning 12 kilometres and is expected to open in 2023. The route will link Parramatta’s CBD and train station to the Westmead Health Precinct, Cumberland Precinct, CommBank Stadium, the Camellia Town Centre, the new science, technology and innovation museum Powerhouse Parramatta, the private and social housing redevelopment at Telopea, Rosehill Gardens Racecourse and three Western Sydney University campuses.

Light rail will create new communities, connect great places and help both locals and visitors across Parramatta explore the region and its attractions. 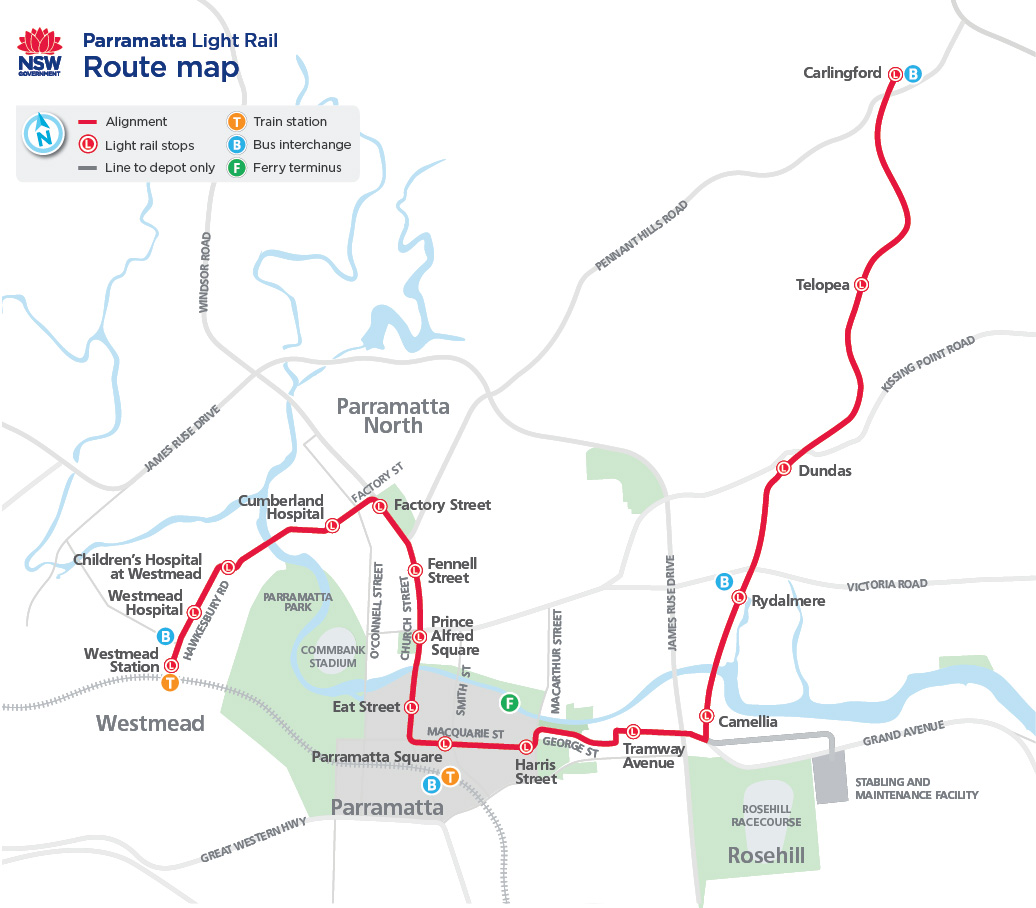 COX began work on this project in 2015, delivering the Parramatta Light Rail Urban Design Framework that was engaged by Transport for NSW to establish an overarching framework and narrative for the alignment and stop locations.

COX explored placemaking opportunities around potential stop locations as well as along the alignment, breaking down the corridor into character areas, each with its own distinct appeal and experiences. Key considerations determined how the project integrated with existing public and active transport networks, improving pedestrian activity and streetscape, and interfacing with major priority precincts and masterplans.

The project is now under construction, and by 2026, around 28,000 people will use Parramatta Light Rail daily, with an estimated 130,000 people living within walking distance of its light rail stops. It will provide 16 accessible stops over a 12-kilometre two-way track, and new shared walking and bike-riding paths, also known as active transport links, along the light rail route.

COX, alongside landscape architects Context, have documented the light rail corridor and corresponding public domain. Building on the experience of previously delivered light rail projects, the focus has been on high quality materials, simple and robust detailing and a landscape response that speaks to the context, place and landscape character of the alignment. It also seeks to create a safe, sustainable, and accessible light rail system. The design of the stops incorporates modularised built components, a “kit of parts” approach that creates architectural and structural design cost efficiencies. 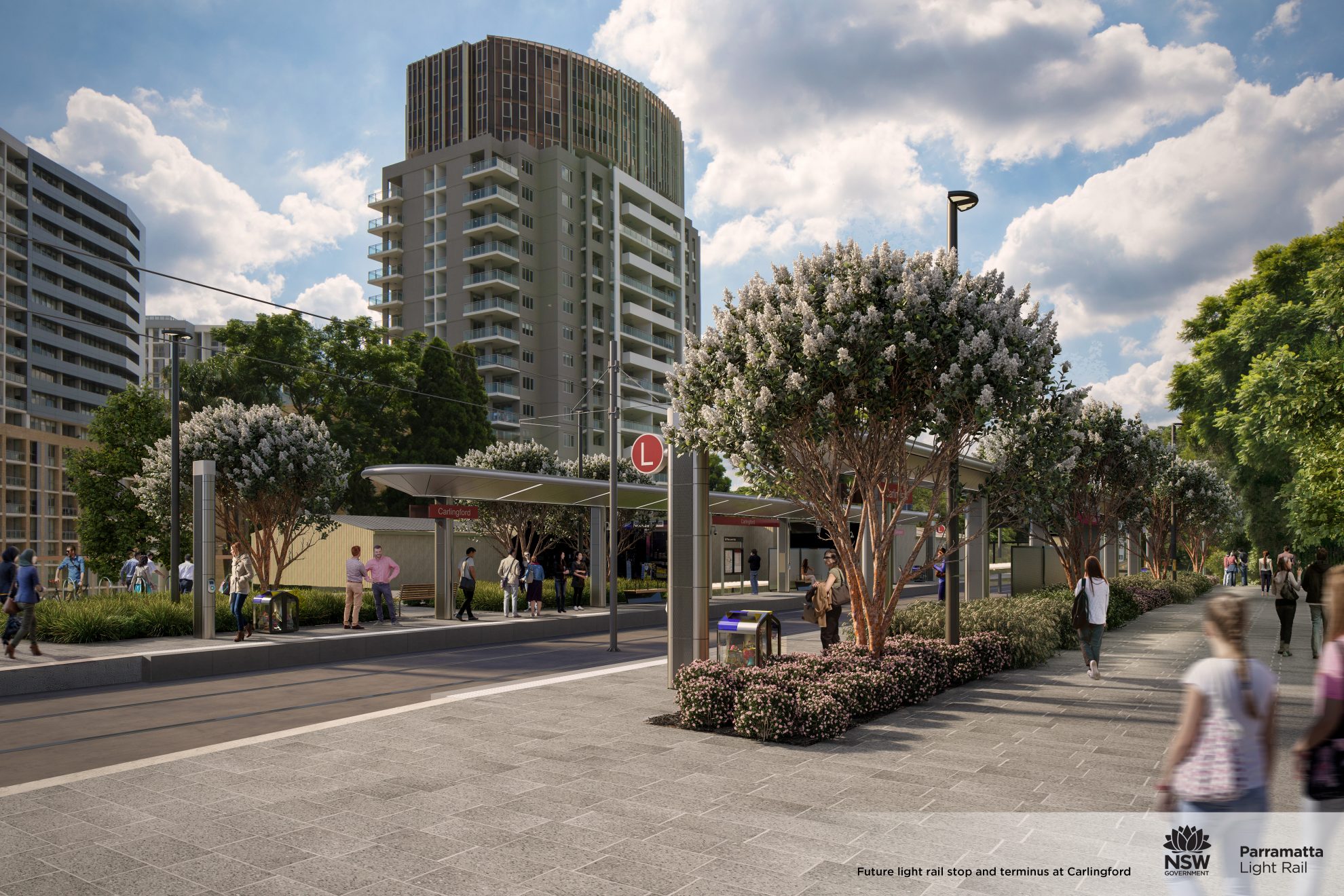