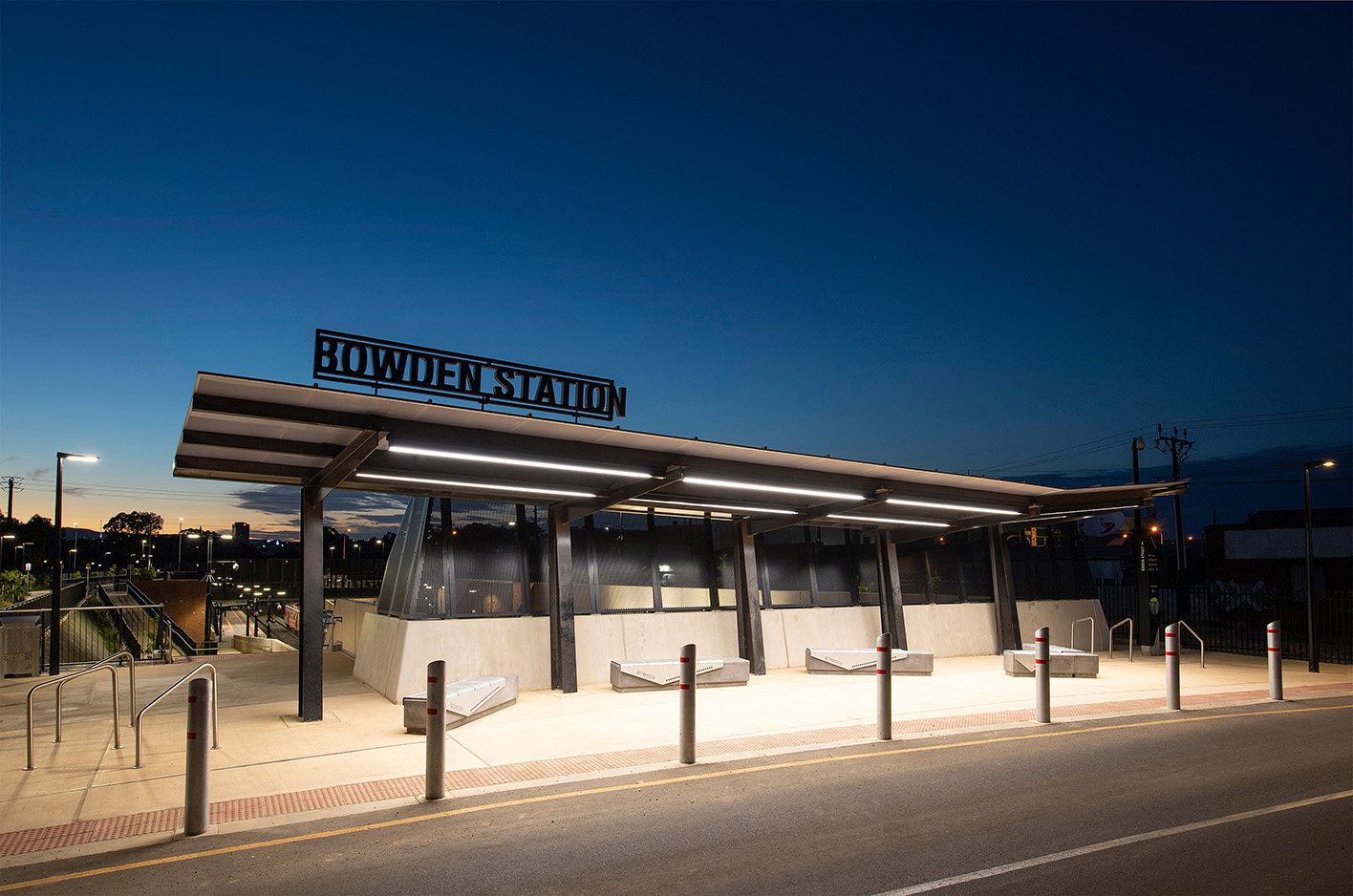 Bowden station was designed to provide improved connectivity with Bowden, the Entertainment Centre, Adelaide Park Lands, local businesses and sporting clubs. This includes the integration of a shared path for pedestrians and cyclists that link Bowden Station, Bowden the suburb and Adelaide Park Lands.

As part of RenewalSA’s commitment to revitalising Bowden, crossings were increased from three to five, ensuring the rail line didn’t become a dividing force through the neighbourhood. Benefits are recognised for all commuters, whether they walk, travel by train, tram or bike.

The conceptual framework explores what it means to go underground. Care has been taken in the treatment of the retaining walls in the station, creating a sense of strata and history as you travel through. Historical connection has been made with form and materiality through exposed black painted steelwork. The brickwork and walls reference the sawtooth roofs of the industrial surrounds. 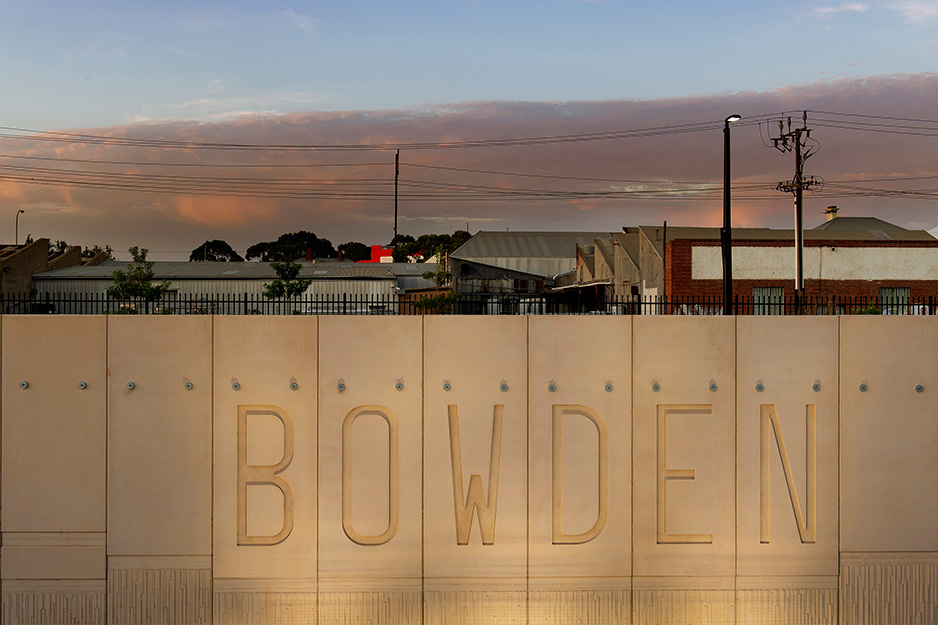 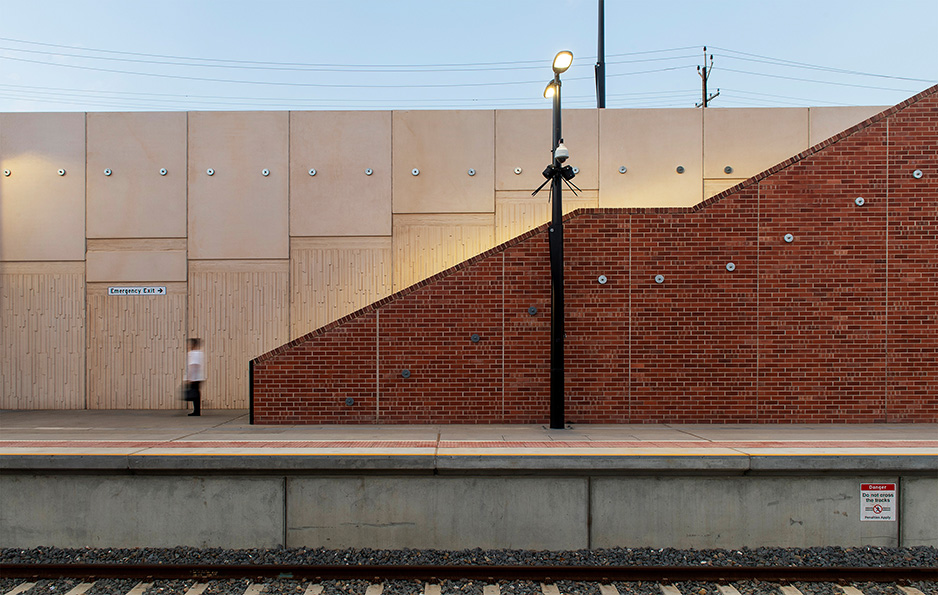 The project tilts the north-western wall at a 45-degree angle allowing ramps to switchback, opening the station to light and sun, and creating visual connection. The Gibson Street canopy provides coverage from the weather and a safe space for passengers travelling at night to wait.

All wall screens are transparent and allow sightlines from every crossing. Opening the station to landscape on the north-western side will give all mixed-use developments a view into the station. As creeping plants grow, a captivating green wall will create a sense of calm.

Throughout the design process, a series of bronze figurines were installed above the main entry points into the station. COX investigated and discovered that DPTA commissioned TAFE students to deliver the place-activating artwork. The tiny figurines add a new dimension of character to the station.

The original station at Bowden is one of Australia’s oldest and is currently being used as a café. In celebration of the building, COX created a wide bridge that fronts it directly. Careful planning was taken in conjunction with Renewal SA to ensure future streets can line up directly with the bridge. A kink in the bridge alludes to the heritage layout of the station; while a widening of its edges allows café patrons to spill out into al fresco seating. 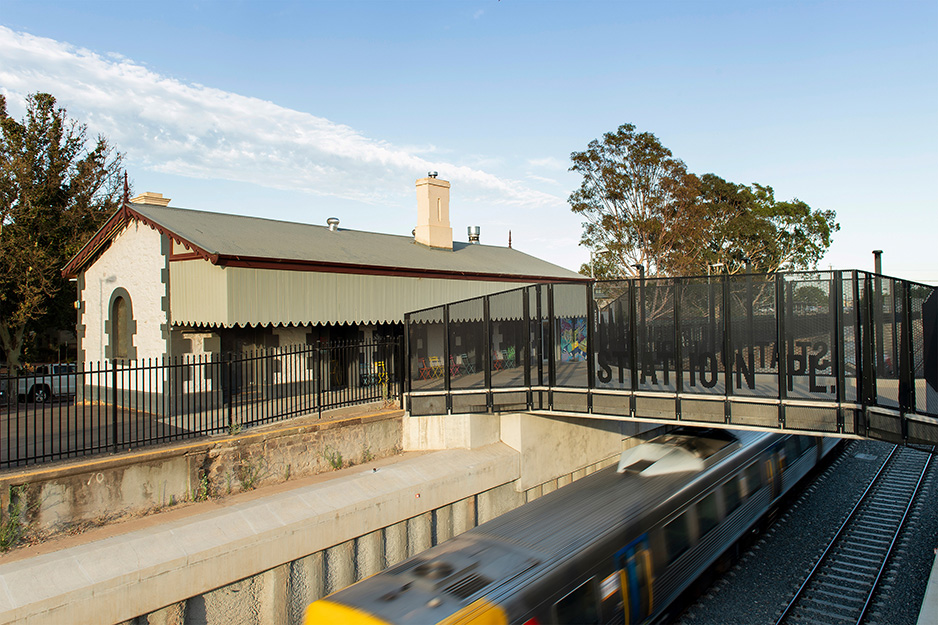 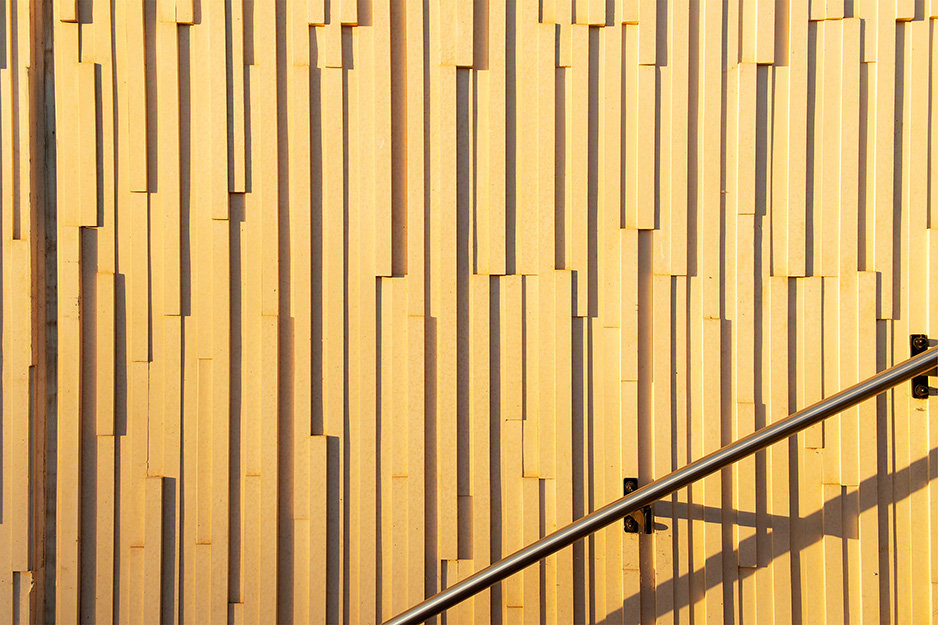 The materials used are robust, vandal proof and have a long-life span. Pre-cast concrete panels are both durable and aesthetically pleasing due to their oxide colouring and graffiti-proof texture. Pre-fabrication allowed for quick onsite construction, which minimised disruption to the line and created significant cost-savings for the client.

The station creates a microclimate very different to the hot, barren wind tunnels of many railway stations. By opening it out to cool north-easterly breezes and greening one of the walls, the feel of the station is cooler and calmer, with obvious benefits to commuters.

The green wall of the station connects it to the elements and creates sightlines, but also takes a wall which traditionally would have been concrete, requiring maintenance crews to come out almost daily to clean graffiti, and replaces it with plantings which only need occasional pruning and maintenance. Subterranean drip lines keep the planting healthy and minimise water loss. A variety of ficus were chosen for the south facing wall to be hardy, shade tolerant and fast growing. Low level bushes create a softened interaction between the wall and commuters.

This is a catalyst project, which has created new connections within the burgeoning Bowden grid. The project completes the cycleway down through the Parklands and into the city allowing 1000 cyclists a day to travel through an unbroken smooth link.