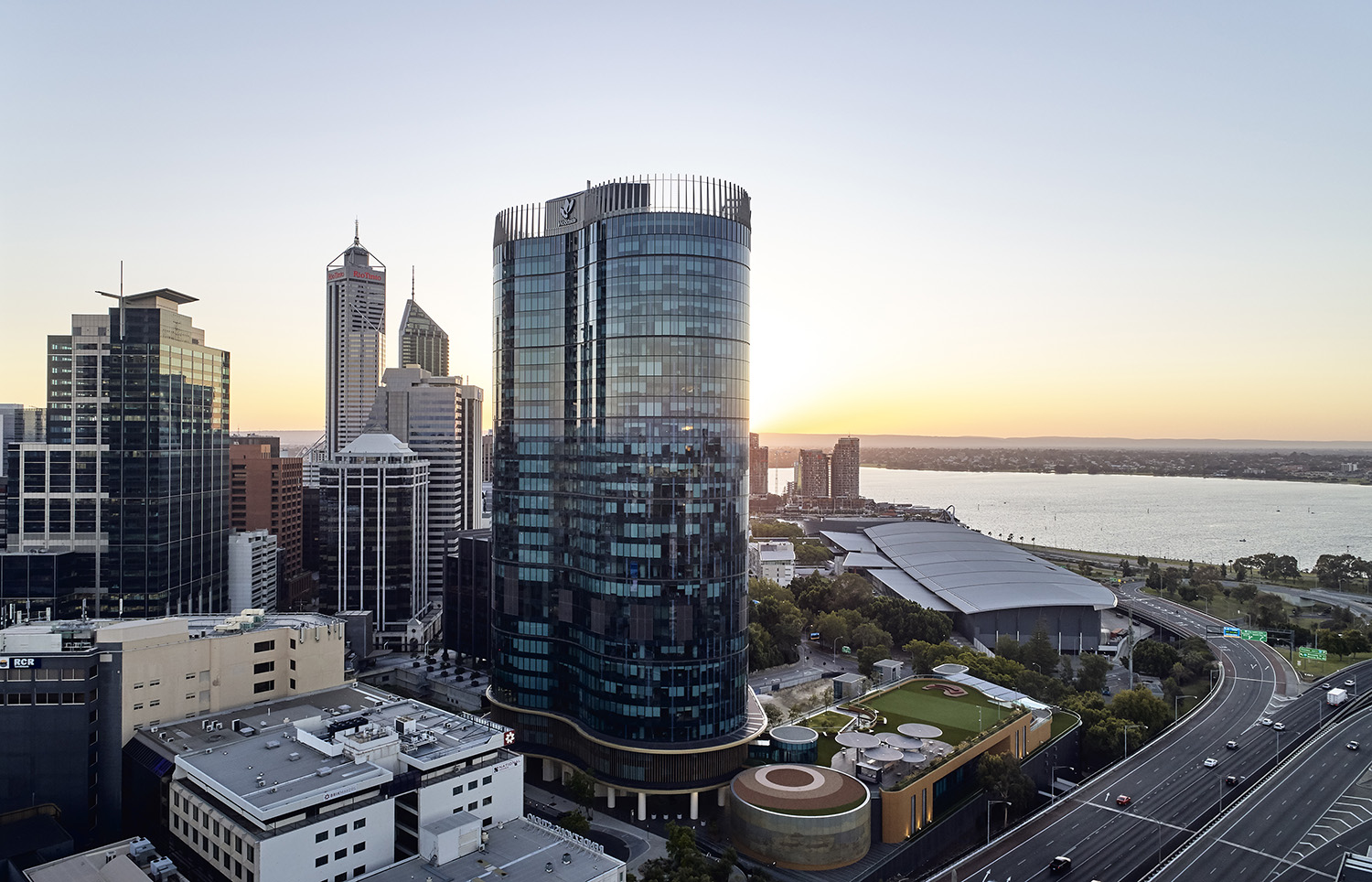 Capital Square is a 30-level commercial office tower, the first of three buildings proposed for this landmark site at the western perimeter of the Perth CBD. Previously occupied by the Emu Brewery, the site is bordered by the Mitchell Freeway to the west, Mounts Bay Road to the south, Spring Street to the east and Mount Street to the north. The overarching vision is to create a contemporary living and working precinct that promotes strong visual and physical connections between the CBD, the foreshore and Kings Park.

Fully leased by Woodside, Capital Square is designed to meet the mining company’s vision of a new paradigm for the city workplace. Woodside’s ethos provided the driver for the design concept, which reflects the company’s focus on people, community and the environment.

The campus responds to its location near the edge of the Swan River. Woodside’s main tower is part of the overall campus called Mia Yellagonga, named after the Whadjuk Noongar elder who welcomed Captain Stirling onto the land in 1829. 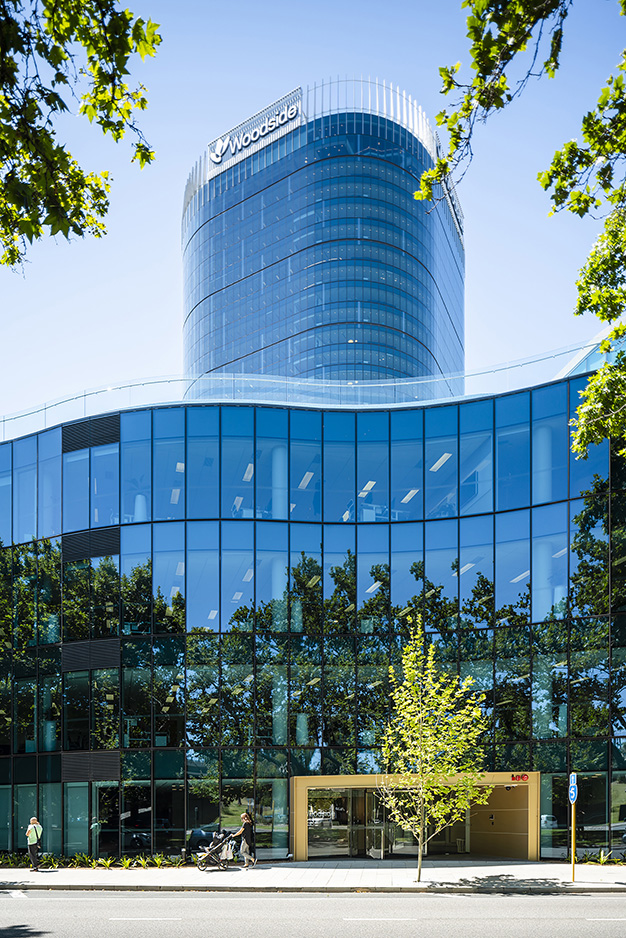 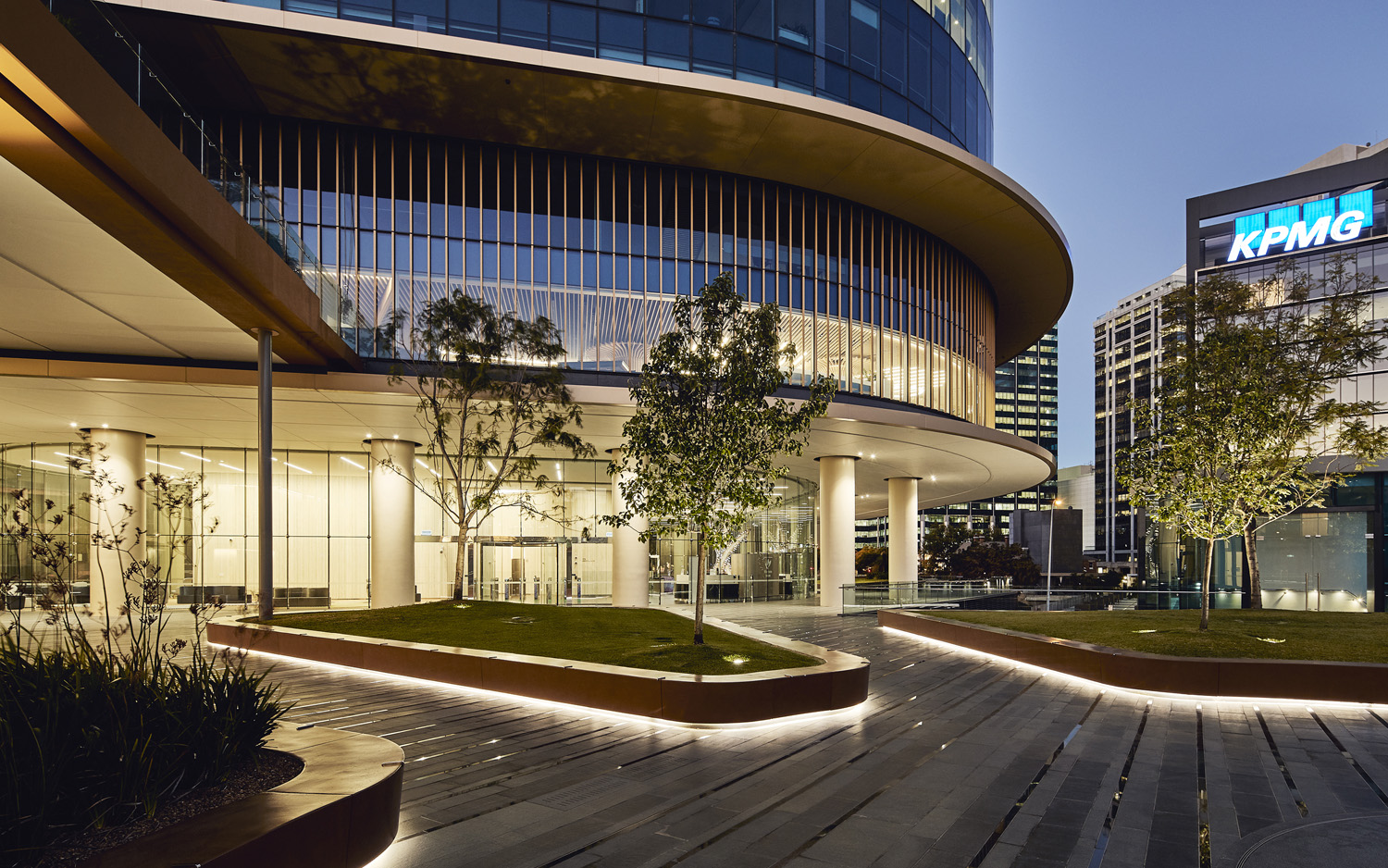 Capital Square has demonstrated commitment to sustainability [that] sets a benchmark of excellence for high-rise office design. The sleek and imposing Mia Yellagonga building holds the highest Green Star rating possible with six stars and has also achieved a five-star NABERS rating, which is a significant achievement…clever and considered planning and design has enabled high quality sustainability outcomes…the environment feels natural… and spaces are filled with an abundance of natural light 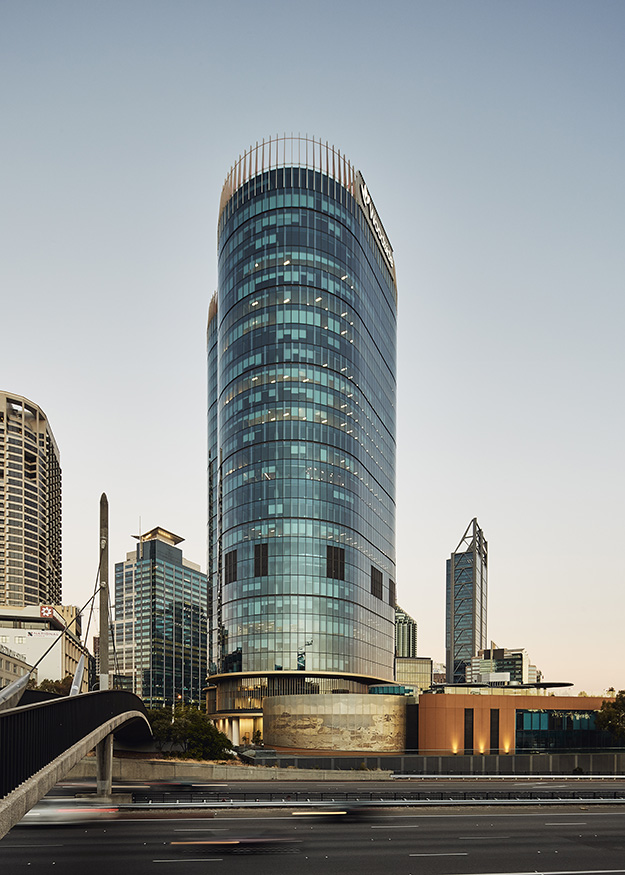 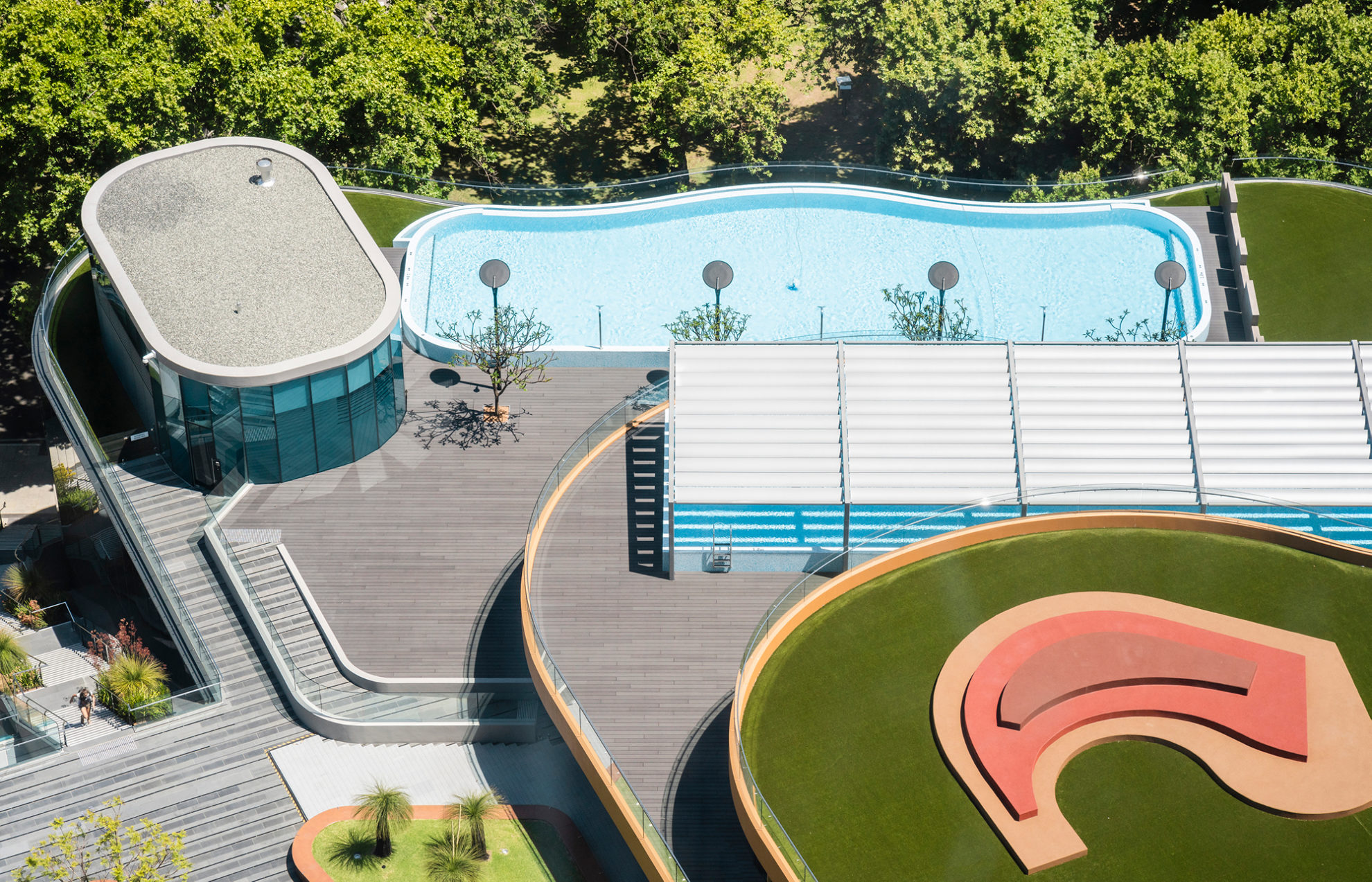 The design employs an organic architectural language that sits in strong contrast to the angular geometry of surrounding urban landscapes. Flowing forms celebrate the freshwater spring which once ran through the site to the river below. A distinctly West Australian palette of colours and materials references earth and sky, with the blue glass of the vertical tower anchored by rich ochres on the horizontal plane. A circular form to the west houses an auditorium clad in gold perforated panels depicting the north-west coast, one of several commissioned public art pieces around the site.

Gold is used as a further accent on the vertical detailing of the tower’s lower floors, and the circular motif is repeated in elements such as structural columns and shade structures. This unified aesthetic creates a distinctive identity that radiates a subtle sense of welcome.

The ground plane opens sightlines and pedestrian links from Mount Street through to a landscaped public podium offering views to Bishops See Gardens and the river beyond. A grand staircase connects to Mounts Bay Road below, where a four-level building echoes the tower’s facade and evokes the river’s edge which once lapped the site. 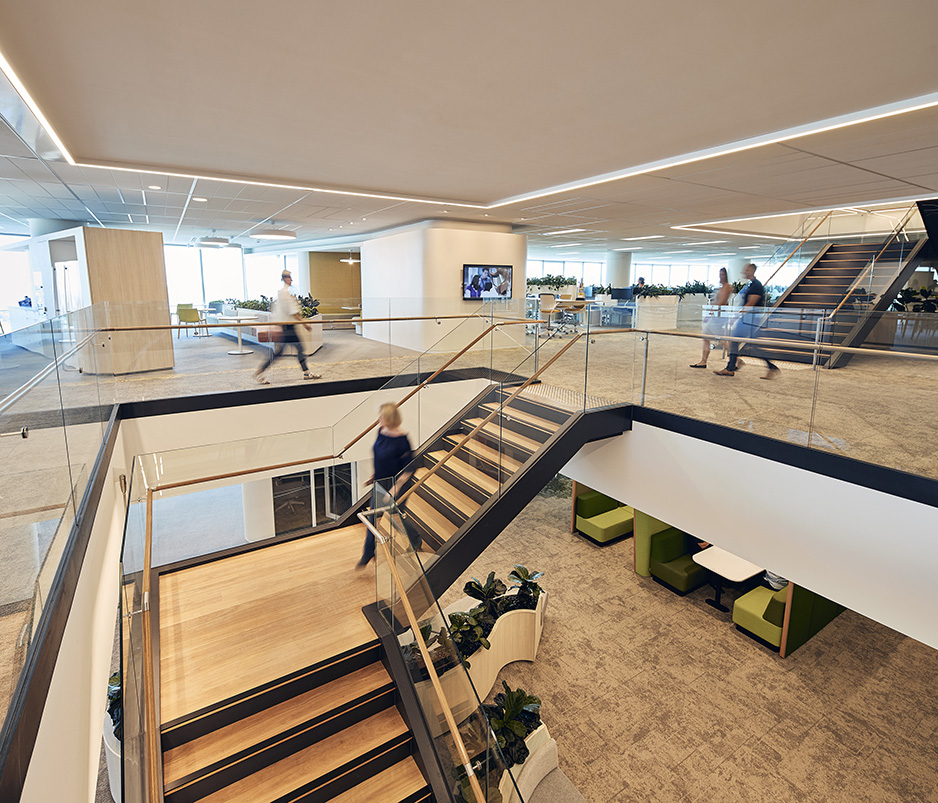 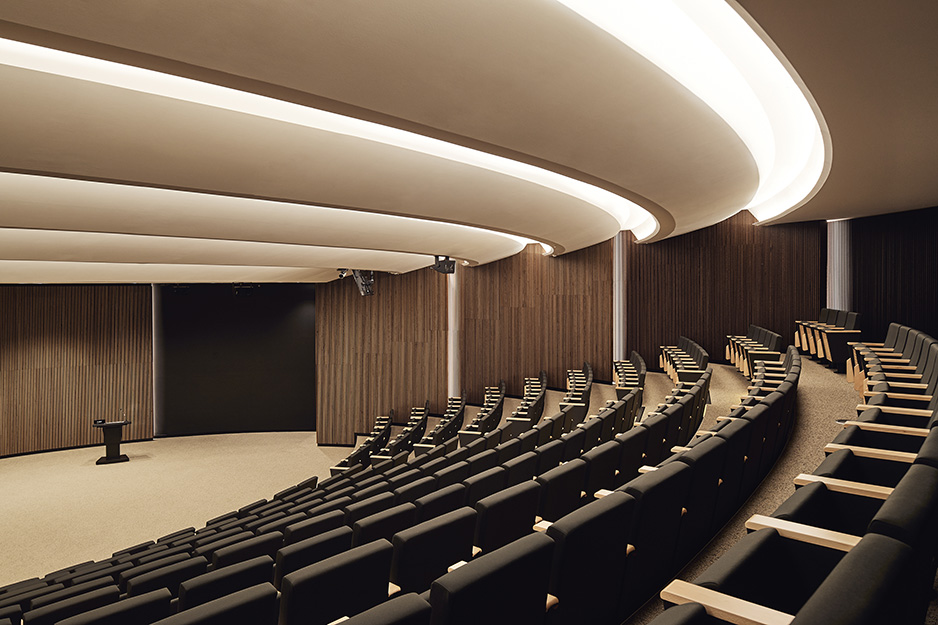