The new Sydney Football Stadium will be a modern, world-class venue that provides Sydney with a sporting and entertainment precinct of an international standard for decades to come. A “Stadium in the Park”, it will further enhance the significant recreation and sports precinct at Moore Park, creating new active spaces for patrons and the community and increasing NSW’s ability to host international, national and local events.

Building on the legacy of the original, its sweeping roof floats over the seating bowl while responding to new urban sensibilities and changing fan expectations, creating a unique identity that will be an icon for Sydney. A sculptural, ribbon facade draws on elements of technology, engineering and art, with its materiality changing in direct response to the immediate context, from surrounding fig trees, to the Sydney Cricket Ground, Kippax Lake and the neighbourhood of Paddington.

Enveloped in a delicate veil of bronze fins, the new Sydney Football Stadium façade proposes an environmentally responsive skin that enhances patrons’ sense of connection to place. Through variations in density and visual porosity, the veil reveals internal programmatic intensity, screens pragmatic functional zones, curates significant external views and connects the seating bowl to the park. Gently undulating in harmony with the sweeping profile of the expressive saddle shape roof, the façade acts as a unifying gesture, amalgamating often competing components of the very large building perimeter into a coherent and expressive architectural composition.  This poetic response to context is then supported by a rigorous understanding of typology and fan expectations,  whether in person or remote, for professional sport in the 21st Century.

More community value, more experience for teams and fans, and with better connection to surrounding parkland and amenity. It is something that is simultaneously sculptural and highly functional. It is lighter, kinder to the environment and more self-sufficient as a structure than any other major stadium in Australia 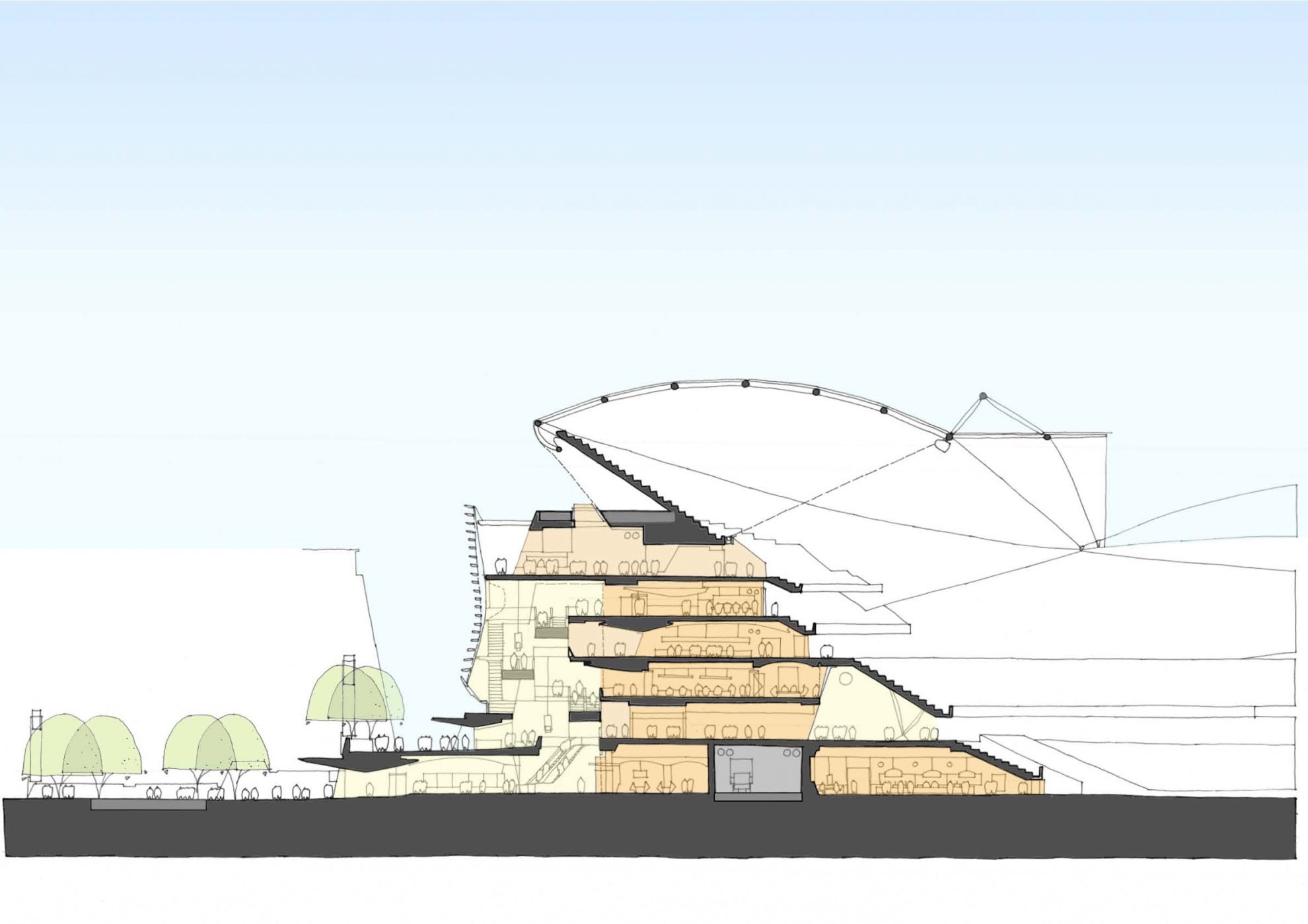 COX’s design response for the Sydney Football Stadium project deliberately turns the city’s attention from the harbour to its unique inner-city precincts; a labyrinth of undulating streets contrasted by expansive, attractive parklands.  It is a planning and design approach intended to strengthen Sydney’s status as a venue for major national sports and entertainment events while simultaneously creating a public precinct for year-round use by the wider community.

The public heart of the structure is an activated “events platform” that will create a  flexible public precinct without fences or other barriers. The landscape will weave together the parkland, public and activated spaces.  In essence, COX has developed a place-making, and not merely an architectural response which recognises sport and public events as a key component of a city’s cultural fabric

At the heart of COX’s ethos is ‘doing more-with-less’.  This inventive approach to the stadium’s design is  explicitly expressed in the roof structure which requires 40 per cent less steel in its construction while offering a carefully resolved stadium profile reducing the building’s impact on its parkland location.

Creating something that both ‘fits in yet stands out’ in that part of Sydney is obviously a tough ask for any design team, as is the task of creating a piece of 7-day civic infrastructure that provides superior amenity and services to multiple specialist and public groups. More than this, these services must be provided in a way that doesn’t detract from what a stadium needs to do well; provide a superior platform for sports and events spectacle for teams, performers and fans. And of course, there was the added responsibility to craft a form which progresses the elegance, balance and recognition of Philip Cox’s original design

The overarching vision for both the architecture and the interiors is to create a harmonious relationship between the SFS and its surrounding environment. We have created a place that is imbued with the soul of Sydney, driven by the rich tapestry of its past, its present and its people. 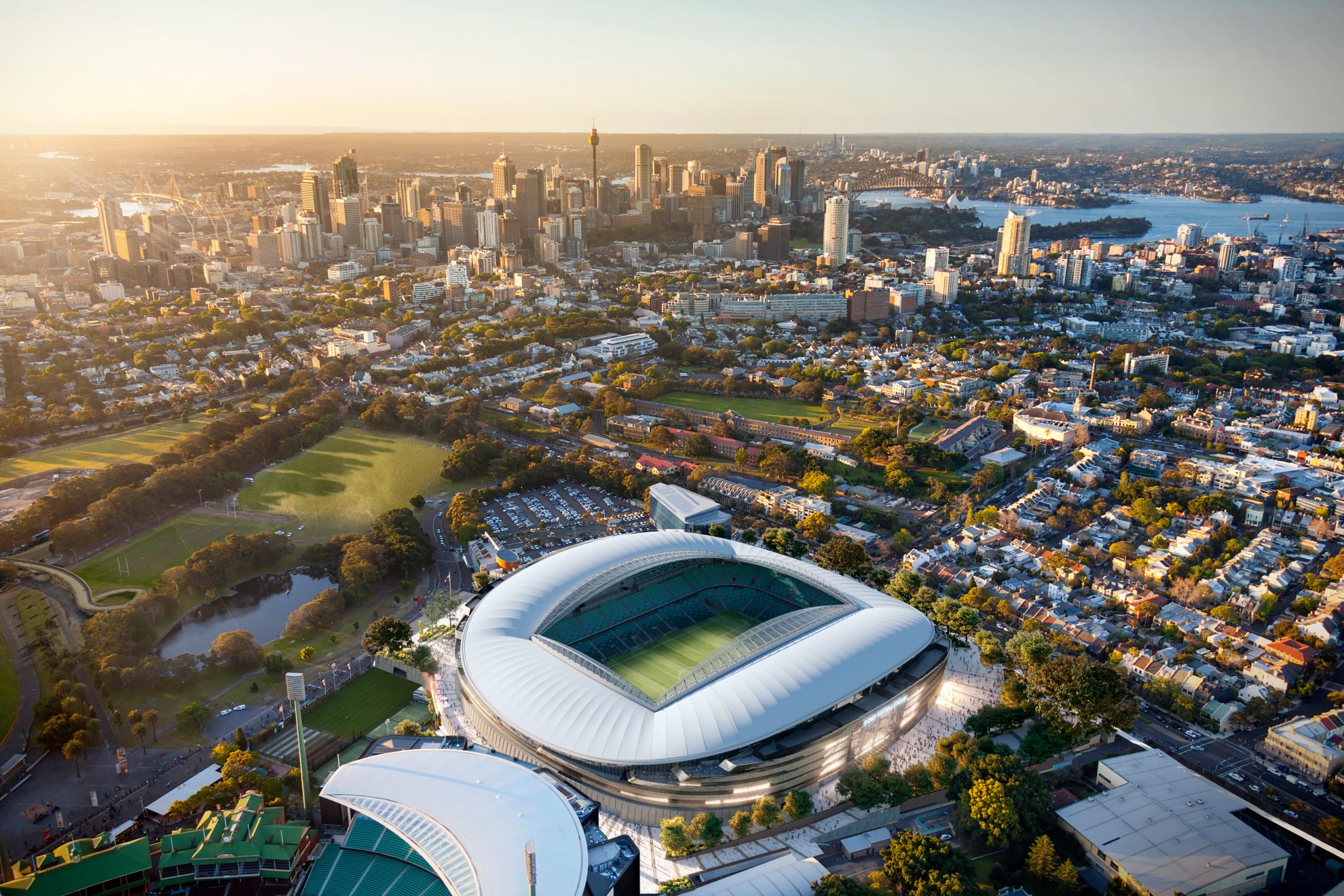 This environmentally aware approach to design is at the heart of the project, which has been designed to achieve a (LEED) gold rating. The new landscape will double the number of trees on the site and create new habitats for wildlife. Access will be easy for pedestrians, cyclists and patrons using public transport. The new roof will provide containment of noise as well as providing protection from rain and sun.

Inside, the roof will cover 100% of the seats and the arrangement of stands will create a sea of faces with great views of the playing field, heightening the patron’s experience within the stadium. Increased numbers of amenities have been provided, with an emphasis on equity of access for all. There are over 330 dedicated wheelchair viewing positions.   Over 48 food and beverage outlets provide a variety of options, promoted by clear wayfinding and easy circulation.

There will also be improved media and broadcast facilities, international standard team facilities and a 360 degree service road. Flexibility to future proof the venue for changes in technology and operations has been built in at every step.

This approach has been strengthened by an interdisciplinary approach with long-standing partners such as Arup, Aurecon and Aspect Studios, new partners such as Schleigh Bergremann Partner and by our early and collaborative involvement with design and construct contractor John Holland.

When completed in 2022, Sydney Football Stadium will reward match-day and event patrons with a richer and more engaging experience; invite regular use by neighbouring residents; and attract city-wide, year-round patronage of what will be a remarkable public place.

The redeveloped Sydney Football Stadium brings together COX’s 40 years of typological evolution of stadia as a piece of our civic architecture. It provides the latest in terms of fans amenity, players facilities and compliments the NSW Government’s establishment of Sydney’s premier sporting precinct. Building on a tradition of sports buildings that spans three centuries at Moore Park, the venue provides a timeless urban design response that builds on its context and rooted in its history and traditions.